Leading in the Midst of Transition

I never set out to be a “temporary” leader.  Who really does?  But perhaps that’s really a core insight about leadership.  All leadership is by its nature transitory and temporary.  By extension, all leadership is in some way an example and part of transition. 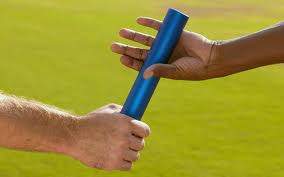 I wonder if what makes a good leader perhaps in part is that they recognize this- the temporary and transition that is a part of leadership.  Such leaders would not be power hungry as is sometimes a popular conception of leaders in general. These leaders would see a central part of their leadership as building up other leaders, empowering them, and then allowing them to grow and take over leadership themselves, kind of like passing the baton in a race.

This seems to resonate with some of the insights Jean Lipman-Blumen has made over the years (especially in her The Connective Edge).  She describes this in some ways as a move from “Stage 2” to “Stage 3” leadership.  According to Jean Lipman-Blumen, in Stage 2, leaders and decision makers “with the greatest economic and military power usually dominated” (8).  In Stage 3, she writes, “As the old geopolitical alliances are dissolving, the connections between concepts, people, and the environment are tightening” (8).   Instead of a focus on power and generating power, there is a connection on building up others and connecting people of experience, perspective, etc. to provide the best decision making, response, and leadership.

Additionally, this pondering about transitional leadership also seems to resonate with insights on purpose and empowerment.  As Richard Ellsworth notes, “the key to success rests in unleashing human potential in the service of the needs of other people…” (Leading with Purpose, 50-51).  To do this in part requires unleashing the human potential of others to also lead in their areas, whatever the company/organization/group that you are part of.  In doing this unleashing, there will be a change to you and the larger organization. This change is in and of itself a transition.  Jim Collins makes a similar observation about “Level 5 Leaders.”  He writes, “Level 5 leaders set up their successors for even greater success in the next generation, whereas egocentric Level 4 leaders often set up their successors for failure.”  Additionally, “Every good-to-great company had Level 5 leadership during the pivotal transition years” (Jim Collins, Good to Great, 39).

I have seen this in the midst of a start-up organization trying to get off of the ground.  In the midst of a start-up functions and roles on the team are less structured, so people are empowered to take ownership and leadership in many different areas.  They aren’t just empowered though, there is a real sense that if they don’t, no one else might be able to because everyone around the table is giving of themselves and is likely overextended.

I have also seen this in the midst of being on congregational staff.  As in leadership in general, ministry leadership is also something that is transitory. Having witnessed and participated in the interim process within a congregation, I have seen how true this is.  If the church believes that it is always “forming and reforming,” then leadership plays an important role in this.  Especially in the congregational setting, to do this, leaders need to do “as much listening as they do talking” and often more listening than talking I would say (Gilbert Rendle, Leading Change in the Congregation, 17).

I have also seen this in my consulting. When consulting within a congregation or non-profit, one of the most important things I have found is to enable to let people give voice for themselves and particularly about what they have experienced and are feeling.  Some times by voicing their perspectives they are particularly able to figure out solutions and ideas for themselves, without being told what they do.  This is empowering, and the consultation then becomes in a way more about facilitation, coaching, discerning, and listening.  I think of Anthony Robinson’s understanding of leadership in light of consulting with congregations like this.  He writes, “Leadership, as I would define it, builds capacity and sustainability within a congregation as it mobilizes a congregation to engage and make progress on its deepest challenges” (Anthony B. Robinson, Changing the Conversation, 84).

To those of you wondering why the timing of this post about leadership and transition, it comes because I find myself in the midst of transition again.  Working about three different jobs at one time has taken a toll, and I am hoping to move to one job so that I can really focus and pour my energy into one role for awhile.  In thinking about this, I wonder if perhaps we are all perpetually in transition in our lives?  That’s a question for another post though.  So, what do you think about leading in the midst of transition?

Jim Collins, Good to Great:  Why Some Companies Make the Leap… and Others Don’t, (New York, NY:  Harper Collins Publishers, 2001).

View all posts by timothysiburg

4 comments on “Leading in the Midst of Transition”